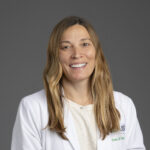 Cancer patients often ask their doctors, “What would you do if you were me?” Here, our Curious Dr. George asks oncologist Summer Dewdney, MD, how she would handle her own diagnosis of advanced ovarian cancer. Dr. Dewdney is Director of the Division of Gynecologic Oncology at Rush University Medical Center in Chicago, Illinois.

Curious Dr. George: You are an expert clinical oncologist treating patients with gynecological malignancies. Imagine that you personally began to experience vague abdominal symptoms and were found to have ascites (excess fluid in the abdomen) with positive cytology for malignancy cells. How would you proceed to manage your own likely ovarian malignancy?

Summer Dewdney, MD: Ovarian cancer is the leading cause of death from a gynecologic malignancy in the United States. However, we have made great strides in the treatment of ovarian cancer in the past couples of years, and this has really become a cancer that can be treated chronically. Each patient’s treatment is individualized, and knowing specific information about genetics and molecular analysis is very important.

Initially, I would get a CT scan of the chest, abdomen, and pelvis to look for evidence of metastatic disease and tumor burden. The majority of the time this cancer is found at stage III or IV, and patients usually present with minimal symptoms despite advanced disease. I would have my tumor markers checked, including CA-125 and CEA, depending on which ones are elevated (mostly likely CA-125); these could be monitored moving forward through treatment and surveillance. Depending on the exact pathology and CT results we would then determine if I would undergo a debulking surgery versus neoadjuvant chemotherapy first. I would ensure my care was being managed at a tertiary care center by a gynecologic oncologist. Having an optimal tumor debulking done by a gynecologic oncologist would be very important as this would impact my overall prognosis. I would also see if there were any clinical trials available for me in an upfront setting and make sure I was at an institution that offered clinical trials. If I was not enrolled in a clinical trial, I would receive carboplatin and paclitaxel either before surgery or after surgery, which would likely be the backbone of any clinical trial too.

I would want information on my BRCA status, both germline and somatic as soon as possible to see if I would need maintenance therapy with a PARP inhibitor after treatment. In addition, my surgical pathology would also be tested for molecular analysis. If my germline testing was negative, my tumor would be tested for HRD (homologous recombination deficiency) and BRCA, and if either was positive this would also help inform the decision on PARP inhibitor maintenance. I know my risk of recurrence would be high if I was found to be at stage III or IV, and therefore would want some sort of maintenance therapy after initial surgery and treatment.

If a recurrence was ever found, it would be important for me to be in a clinical trial. If my recurrence didn’t occur for years after treatment and was isolated or only minimal disease, I would consider undergoing a secondary debulking surgery first, followed by systemic treatment (hopefully a clinical trial). My hope would be that the recurrence occurred more than 6 months from the end of treatment and define me as platinum-sensitive, as this prognosis is better.

Personally, quality of life and time with family would be very important, and I would have palliative care involved earlier than later. I would make sure if I did succumb to this disease after hopefully years of living with it, that my last days were not in a hospital and spent with my family.

In summary, ovarian cancer is a tough disease but can be treated for years. Some patients may even be “cured” and not experience a recurrence, but this is the exception rather than the rule. I want to emphasize that many patients are able to have this disease controlled for “years” and often patients experience times of remission.

Requests for Dr. Dewdney’s email address can be sent to Curious Dr. George at gdlundberg@gmail.com.

New Treatments for Ovarian Cancer in 2020

How an Expert Would Manage Her Own Advanced Colorectal Cancer

Image Credit:
It is so overwhelming to try to do research on your own for clinical trials for your loved one—especially when you are trying to take care of the person you love, work full-time, take care of myself and my family. Looking through all the clinical trials I did before finding Cancer Commons, I was completely lost. I am not a doctor and didn’t understand... Read more »