Lung cancer in young people—in particular, non-small cell lung cancer (NSCLC)—is a topic of great interest. It has been made even more so by the recent publication of a study in The Journal of the American Medical Association (JAMA) that analyzed over 2,000 NSCLC patients of all ages and resulted in two major conclusions: First, that younger patients (less than 40 years old) have a higher frequency of targetable mutations. Second, that they have relatively poor survival when compared to older patients, except those older than 70 years.

Lung cancer is rarely diagnosed in young people; only 4% (81) of the patients in this study were younger than 40 years. The low number of young patients in this retrospective analysis clearly necessitates the need for larger studies to make the conclusions more valid (statistically significant). Keeping in mind these limitations, the results are still interesting and perhaps somewhat disturbing. The table below shows the percentages of patients whose tumors had the indicated mutations, stratified by age (young versus all).

It is clear that EGFR mutations and translocations of ALK and ROS1 occurred more frequently in younger patients. Because of the small number of young patients in the study, the trend of increased frequency of ROS1 in younger patients was not statistically significant. At the same time, the frequency of BRAF mutations gradually increased with older age (detailed data are in the paper), and so did that of KRAS mutations. (KRAS is heavily associated with smoking, and smoking related cancers take a long time to develop).

The second important point from the study is that these younger patients, irrespective of the presence of targetable mutations in their tumors, had unexpectedly poor survival, comparable only to that of the oldest group (more than 70 years old).

This conclusion is not without controversy. Other studies have reported that lung cancer in young patients actually has a better prognosis. A large study calculated that between 1978 and 2010, patients younger than 40 years comprised just 0.6% of all patients with NSCLC and had markedly better survival rates than older patients. The frequency of lung cancer in young people decreased significantly during this time interval. Another study also reported that between 1988 and 2012, younger NSCLC patients had better survival, and the incidence of cancer in young patients was stable during these 24 years. A British study of close to 150,000 patients again reported better survival in younger patients and attributed it to the generally better overall health status of younger people. And at least one more study concluded that the survival of younger versus older patients is pretty much the same. In support of the JAMA study, this study also reported a higher frequency of targetable molecular alterations in younger patients.

Finally, a very recent study from Taiwan documented poor outcomes in EGFR-positive cancers of patients less than 40 years old. In this study, the progression-free survival of patients with EGFR-positive NSCLC was only 3.3 months versus 11.6 months in older age groups—a striking difference. Unlike the JAMA study, the Taiwanese study included only patients treated with EGFR inhibitors, providing further (unwelcome) support for a poor prognosis for young EGFR-positive cancer patients receiving the approved front-line treatment.

Historically, four factors were considered to favor the presence of targetable mutations: negative smoking status (non-smokers), female gender, Asian race, and the adenocarcinoma type of NSCLC. Geoffrey Oxnard, the senior author of the JAMA study, suggests that adding young age to this list is now warranted. Moreover, he says, comprehensive mutational profiling should become a routine part of care in young NSCLC patients, considering that they have a higher frequency of targetable mutations and a poor prognosis.

These new insights into NSCLC in young patients are even more important considering that some publications suggest that lung cancer in the young is on the rise, attributing the increase to unknown environmental causes. It is tempting to speculate that because smoking rates are dropping, the proportion of non-smokers who get lung cancer is increasing, possibly accounting for a decrease in age at diagnosis. However, large epidemiological studies are required to establish what are the new trends in lung cancer in terms of age distribution.

Image Credit: Non-small cell lung cancer. Credit: Yale Rosen
What I appreciate the most about Emma is her human goodness and empathy. I have never felt I was just a case for her. 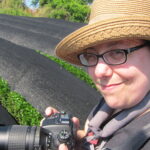