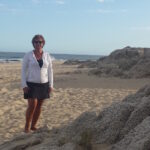 In the fall of 2014, I experienced an unusual dry cough with nasal drain, and was just not feeling like myself—someone who rarely got sick. My general practitioner performed several tests that revealed nothing, and lung cancer was never suspected because I hadn’t been a smoker and had no family history.

By the following summer, when I developed shortness of breath, I was tested again, was told I had asthma, and received a prescription for steroid treatment. Only then did I take charge of the situation, question my doctor, and ask for a chest X-ray, which showed a three-by-four-inch tumor in my right lung. In October of 2015, I was diagnosed at age 53 with stage 4 non-small cell lung cancer (NSCLC). I had a pleural effusion, and my cancer had the mutations EGFR +ve and exon 19 deletion.

Needless to say, I was shocked…and it seemed ludicrous to me to accept the grim prognosis of 9 to 12 months, as if every patient was the same. After researching this deadly disease, I refused to accept a short life expectancy based solely on historical data. Lung cancer research had been disproportionately underfunded and little progress had been made for decades. But things had advanced substantially in the last five years, so it was time for new statistics!

Carla with her husband and son in Panama

After five days of radiation, I was prescribed afatinib (often sold under the brand name Gilotrif). This was effective for three years, during which I was blessed with an excellent “normal” quality of life. Now I am on Tagrisso (generic name osimertinib), which is working well, and thankfully, without side effects.

My advice to any cancer patient is to take control…it is YOUR life! I have changed hospitals three times and am fortunate to have sought out an amazing oncologist who is compassionate, knowledgeable, and proactive, always welcoming my input. I partnered with the best naturopath in the province, who specializes in cancer and guided me towards the most effective supplements and adjuvant therapies. While I live and have received most of my treatment in Canada, I also researched international alternative treatments and travelled to Cuba several times for Vaxira vaccines. And I found Emma at Cancer Commons, who has been a wonderful support and incredible resource.

I would also advise any patient to listen to your body and always go with your gut. Though I had no symptoms, 1.5 years after diagnosis I felt I should have another brain MRI “just in case.” Lo and behold, it revealed four small brain metastases, which were immediately and successfully Gamma Knifed and have not returned. 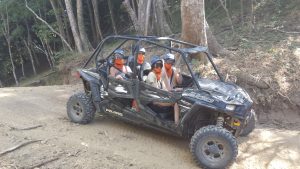 Carla and extended family in Mexico

A year after that, my CT scan showed “thickening of the omentum” and growths on my ovaries, which my gynecologist did not think was related to the NSCLC. I persevered and requested surgery, which discovered and removed tumors in my abdominal area. These proved to be metastases from NSCLC. They tested positive for the necessary resistance mutation (T790M), which allowed me to start my second targeted therapy (Tagrisso). I have been taking this drug since October 2018, and I am doing very well now.

Lastly, I advise any cancer patient to surround yourself with positivity. Read stories about cancer survivors. Talk to people who have open minds and are optimists. And most important, allow yourself to have HOPE!

Travelling has always been my passion, and this health “scare” has made that a bigger priority than ever. I have taken advantage of the companionship of friends and family and experienced over a dozen fabulous adventures since my diagnosis just over three years ago. Do more of what you love!