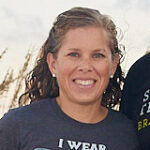 In August of 2020, shortly before his 42nd birthday, Dan was diagnosed with a brain tumor. Here, his wife Tracy shares their journey so far—and what they’ve learned about navigating cancer treatment.

What were your husband’s initial symptoms?

Dan’s symptoms began in the spring of 2020. The world was shutting down due to COVID-19, and my husband began teaching high school from home as well as care for (and home school) our 3 kids (ages 6, 3, and 9 months) while I continued to work out of the house in healthcare. Initial symptoms were complaints of headaches and difficulties concentrating. I told Dan, “Of course you are having headaches and difficulties concentrating…look at what you are doing on a daily basis.”

By the time summer came, Dan started also complaining of dizziness. Working in physical therapy, I see a lot of patients with dizziness due to issues with their inner ears. I tried to fix Dan’s ears, but it did not improve his symptoms. We had a trip planned for the following week and I told Dan it was time to stop putting it off; he had to see the doctor when we returned. Monday morning (July 20, 2020) came and Dan called and set up a virtual visit with his primary care physician. Dr. Schramm was worried about some of his symptoms and sent him for a STAT CT, which was scheduled within the hour. Dr. Schramm’s initial thought was mini strokes. In my head. I was thinking, “That’s ok; he’s fully functional, we can treat this.” Dan met me at my office, which happened to be at the hospital where his scan was scheduled. I took our 3 kids home and told him I’d see him in about an hour. We credit Dr. Schramm with taking quick action and not ignoring Dan’s somewhat vague symptoms.

I was home making dinner with the kids when Dan called. He said he was done with the CT scan, but they wouldn’t let him leave. Working in healthcare, I knew this wasn’t a good thing. I quickly packed up the kids and called my parents to have them meet me at the emergency department. The emergency physician’s initial thought was a blood clot. Again, I thought, “That’s ok; he’s fully functional; we can treat this.” The physician then came back in and said that the neuro team had looked at the scan and wanted Dan admitted to the neuro ICU in the big hospital downtown. Because of COVID-19 precautions, I wasn’t allowed to make this transfer with him. So I watched them load Dan into the ambulance to transport him downtown.

What were the next steps in Dan’s diagnosis?

The next few days were a whirlwind of tests that I don’t really remember due to not being allowed in the hospital. When dealing with a potential brain tumor, things move very quickly, and Dan was scheduled for brain surgery 3 days later—which happened to be our 9th wedding anniversary. I was allowed to be in the hospital for surgery but not actually allowed to see Dan. I may have worn my work scrubs and badge and snuck in a back elevator to find him for a few minutes before being kicked out. This day was the first time I even met the neurosurgeon’s team and was able to ask a few questions.

Dan’s surgery ended up being bumped until the next day since the pathologist was unavailable and the case before him ran long. My feelings ranged from relief that Dan wasn’t “that bad that he needed surgery now” to more scared that they only wanted to do his surgery with the best pathologist available. At this point no one had told me what they were thinking they were going to find during the craniotomy. Dan didn’t tell me that the oncologist had been in his room to meet with him; I think he was trying to not freak me out. He just kept telling me they wouldn’t know what the spot on the scans was until they got in there. Finally, the physician assistant told us it could be an abscess (which was unlikely given the size) or a primary brain tumor.

On July 24, Dan had his first craniotomy. The wonderful neurosurgeon, Dr. Sauvageau, came and reported that the procedure went well, but it was, in fact, a tumor. He said some tumors are better than others and that Dan’s young age and current functional abilities would definitely help him. He said we would know more when final pathology came back in two weeks. Follow up at Baptist MD Anderson Cancer Center was scheduled for August 10.

Over the weekend of Aug 1, we received a text from the neurooncologist’s nurse practitioner that pathology was back and they could see us on Monday August 3. As we have learned, things move crazy fast in the cancer world. August 3, 2020 was the day Dan received his cancer diagnosis, 11 days before his 42nd birthday. He was diagnosed with a grade 3 anaplastic astrocytoma, and treatment would start with 6 weeks of chemotherapy and radiation. This was a very overwhelming day, meeting with the entire team, but we couldn’t ask for better people. Neurooncologist Dr. Cavaliere, radiation oncologist Dr. Olsen, and their entire teams took lots of time to explain everything and answer lots of questions.

How would you describe your husband’s treatment experiences so far?

My husband started with and is currently on the standard of care, which is radiation/chemo; he did 20 radiation sessions. It was decided to only do 4 weeks of radiation after the tumor board at MD Anderson discussed his case. This was then followed by 12 cycles of 5 days on and 23 days off of chemo. Typical chemo to start with is a pill called Temodar/temozolomide.

In December 2020, scans started showing growth of something around Dan’s tumor site. There was great debate if it was tumor or radiation necrosis. By March 2021, there was enough growth of this spot that it was decided to do another surgery to remove it. When final pathology came back it showed 90% radiation necrosis, but 10% tumor cells. It was determined that these cells were starting to favor glioblastoma (GBM) cells and Dan was officially upgraded to a GBM. This upgrade is scary; however, it opens many doors for clinical trials as there aren’t many trials for grade 3 anaplastic astrocytomas.

After the initial radiation, Dan also began using a wearable Optune device, which uses electric fields to treat GBM. While Optune does have a learning curve and took time to get used to, we like the benefits that it can provide. It is now part of Dan, and we find ways to continue on with our normal life in spite of it. Dan is also taking off-label medications that have some possibility of being effective against GBM tumors. We and his care team feel that when dealing with this diagnosis we might as well throw everything possible at it.

How did you find Cancer Commons?

We found Cancer Commons through Facebook groups, which have been a source of tons of information. I’m not a huge fan of social media, but it has been so helpful to interact with others with this same diagnosis from all over the world. We have learned of different treatments and clinical trials from “real” people undergoing them.

When I came across Cancer Commons, Dan and I had already begun discussing clinical trials with our neurooncologist, should the need arise. At Dan’s treatment center they are currently looking at the polio virus for the treatment of GBMs. This has shown very promising results over the years, but I wanted to see what else was out there. Searching clinicaltrials.gov is very overwhelming, so it was nice to have the Scientists at Cancer Commons do the work for me.

Dan finally had a stable MRI at his last visit. Although we are not currently seeking a clinical trial because of this, Cancer Commons still followed through and provided me with a very comprehensive list. Unfortunately, in the glioblastoma world things can change at any time, so we are glad to have this list of trials.

How has cancer impacted your life as the wife of a person with glioblastoma?

Cancer has flipped our lives upside down, but life keeps going and doesn’t slow down. Our three small kids keep us busy. Yes, it’s hard, but these are the cards we were dealt. I could sit in the corner and cry all day (trust me, I still have my moments) or I can keep moving and go to work (which is a great mental break), keep my kids happy, and continue to research and advocate for the best care for my husband.

What advice would you give to other patients or family members facing a new cancer diagnosis?

Accept help! This is still difficult for me to do, but you can’t do this alone. A meal train from the neighborhood, many of whom we didn’t know, was great support early on during radiation.

And ask questions! Don’t be scared to ask your team about different treatments or why they are choosing what they are choosing. Write things down and ask them to explain and explain again if you don’t understand.

Also, find a good support group. For us, especially during covid, Facebook has been a wealth of information and support.