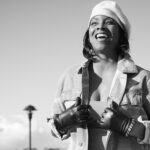 In April of 2017, I was diagnosed with stage IV metastatic triple negative breast cancer (mTNBC). Just two years prior, I had undergone treatment for primary stage 1 TNBC, which included a lumpectomy, four rounds of chemotherapy, a voluntary double mastectomy, and immediate breast reconstruction. Sadly, I had joined the ~20% of early stage TNBC patients whose disease comes back aggressively within three years of the primary diagnosis.

A feeling of betrayal had set in. Not only had one of the deadliest forms of breast cancer come back to lay claim to my body, but my oncologist quickly turned into my gatekeeper, discounting all my attempts to seek out alternative forms of treatment and access to the tools that would lead me in a different direction from the standard of care. She recommended that I “potentially consider doing that if we fail all conventional therapy.” What was “that,” you may ask? It was genomic testing.

You see, no longer was I going to stand by and allow my treatment plan to be driven by fear and broad-based decisions, without consideration of the unique characteristics of my cancer. Even before I sat down and received the results of my new biopsy report, I’d already switched gears. No longer was I interested in an oncologist who charted on New York magazine’s “Best Doctors” list; now, I was more interested in cancer research, specifically oncologists who were publishing results on advanced TNBC research, and their findings.

My search led me to an oncologist who believed genomic sequencing (testing and identifying the DNA alterations in the tumor that may be driving the growth of the cancer) should be standard of care for all patients with advanced cancer. After taking a look at my tumor, this research oncologist also informed me that I had an enormous amount of tumor-infiltrating lymphocytes (TILs), immune system cells that help fight cancer. According to this oncologist, my high TIL levels indicated that I may be one of the lucky 15% of breast cancer patients who respond to immunotherapy—treatment that uses a patient’s own immune system to fight cancer.

I had now formed a fact-based action plan: to attempt to receive immunotherapy treatment through a clinical trial. The feeling of being in control and having options gave me a wonderful sense of power and peace. However, when I shared the new plan with my original oncologist, she dismissed my plea for evidence-based personalized care, and I immediately knew that our relationship was over. You see, while I was doing research, I had taken a good hard look at clinical trials on https://clinicaltrials.gov/. I’d zeroed in on the exclusion criteria, which clearly stated that having too many previous treatments could take away your chances of participating in a clinical trial. My gatekeeper was trying to shut the door on my options. Dismayed, I divorced my original oncologist and never looked back.

I continued on without a team, searching desperately for a clinical trial. I’d received my genomic report back from the research oncologist who’d informed me about my TILs, and it verified that I had several mutations, including PIK3R1 and PMS2. It also showed that I had an intermediate tumor mutational burden (TMB), indicating that I could potentially have a good response to immunotherapy.

I pored over lots of clinical trial material and used the genomic report to narrow down my choices. The struggle to get past the gatekeepers, receive a call back, or track down the correct trial was daunting without an oncologist. Finally, I made the bold decision to cut out the middleman and contact a principal investigator (the doctor in charge of a clinical trial) directly.

Amazingly, the principal investigator called me back, and after initially shooting down my request to join the trial he was overseeing, he told me about a trial “coming down the pipeline” that would open up to include TNBC patients. A phase 1b “double agent” trial, it would involve two immunotherapy drugs: NKTR-214 (a reconfigured form of the immune-boosting drug IL-2) and Opdivo, one of the previously approved PD-1 checkpoint inhibitor drugs, given to patients via infusion every 21 days. He asked if was interested, and of course I said, “yes!”

Finally, 12 weeks after my metastatic diagnosis, I was going to enter a clinical trial. I contacted Amanda Nottke, PhD, at Cancer Commons to ask questions regarding what to expect from the clinical trial. Amanda indicated that I should ask about my PDL-1 status, explained the possible benefits of having a higher TMB, and suggested I ask the clinical trial team about patient monitoring for safety and side-effect concerns. Amanda also asked that I keep her updated once I began the trial, to monitor my progress.

In September of 2017, just eight weeks after starting the trial, I had my first CT scan, which revealed a 72% reduction in my cancer tumors! Becoming my own advocate and following a different path based on facts had succeeded. I’d beat the tremendous odds (the principal investigator told me there was a 4% shot of an immunotherapy-only trial actually working), and by 2018, my scans showed that the tumors in my spine, lungs, and ribs had disappeared. The struggle had paid off.

These days, I am doing well, and my scans reveal no progression or growth. I have slowly returned to the gym and am planning to pull my bike out again and begin riding. I had a chance to model for the re-launch of AnaOno, a line of lingerie for women who have had breast surgery and reconstruction. And because of my metastatic journey and all it took to stay alive, a whole new platform has opened up for me to engage, advocate, and travel around the country telling my story to help other cancer patients.

So, if you are reading this, know that I have no medical background, hook up, or special training. I just decided to follow the research and believe in the tools that are available to help cancer patients become informed, educated, and make fact-based decisions. You’re not alone. Cancer Commons is a great resource and sounding board to ask questions and get advice and support. Being your own advocate may not be easy, but I can’t think of a more fulfilling job.