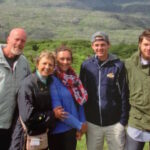 In early 2016, Mary Beth Smith was getting ready to retire after almost 40 years as a morning radio broadcaster in Toldeo, Ohio. She was an active 62-year-old working mom. She loved walking her two dogs everyday, learning to play pickleball, reading voraciously, spending quality time with her husband—the love of her life for 27 years, and watching their daughter and two sons grow into thriving adults.

However, her life was quickly interrupted by a relapse of non-Hodgkin’s lymphoma (NHL), which she had first dealt with in 2012. Here, she shares her story.

How were you first diagnosed with non-Hodgkin’s lymphoma?

In November of 2012, I thought I was having an appendicitis issue. A CT scan revealed several swollen lymph nodes in my abdominal cavity—totally unrelated to the appendicitis discomfort; I truly believe the saying, “coincidence is God’s way of remaining anonymous.”

A second CT scan and a surgical biopsy proved the lymph nodes were diffuse large B-cell lymphoma (DLBCL), and I immediately began six treatments of R-CHOP chemo, three weeks apart. Subsequent PET scans showed I was crystal clear of the cancer—and I remained so for two years.

What happened after those two years?

A routine PET scan in 2015 revealed the cancer had returned, but this time in the form of follicular cancer—a much lower grade—and requiring no treatment; just a “watch-and-wait” process which could take many years to manifest itself into anything serious.

In early 2016, the follicular lymphoma had transformed into the diffuse large B-cell, and I was then on track for a more rigorous course of treatment: a stem cell transplant of my own cells. This is not an easy process; it requires harsh chemotherapy and then the transfer of your cells back into your body. Unfortunately, two follow-up PET scans showed the transplant did not work for me.

Again, coincidence (God’s way) intervened, and I heard from a friend of many years, Jude LaCava, who had started the Dorothy Foundation in honor of his mother who had died from cancer. He was wondering how I was doing, and when I told him about my latest challenges, he recommended I get in touch with Cancer Commons. Specifically, he said to contact chief scientist Emma Shtivelman who researches all the possible clinical trials available to patients like me.

How has Dr. Shtivelman helped you?

Dr. Shtivelman was a godsend who took me from desperation to hope in a matter of a few emails. She sent me many clinical trial possibilities and particularly focused on a relatively new and still experimental immunotherapy known as CAR T-cell infusions. These infusions use your own white blood cells (T-cells), which are sent to a lab for several weeks to be re-engineered to fight the cancer in your system. In other words, your own blood cells attack the cancer.

I also contacted the Leukemia and Lymphoma Society (LLS) because they also have a nurse navigator who studies clinical trials. She also said CAR T-cell therapy was the latest treatment that seemed to be having encouraging results. When I cross-referenced the material from Cancer Commons and LLS, I came up with several matching clinical trials involving the CAR T-cell treatment. The goal was to find one near my home in Toledo, if I could. And to find one that would accept me sooner than later.

You ended up enrolling in a CAR T-cell trial at Cleveland Clinic last November. How did you decide on that specific trial?

My local oncologist knew the hematologist/oncologist at Cleveland Clinic who was well versed in CAR T-cell treatment. This physician was able to see me reasonably quickly and the next thing I knew, I was #3 on the list to become part of their clinical trail. Within weeks, I had moved up to #1 on the list and the process really accelerated from there.

From November through December 2016, I went through extensive testing required by the Kite pharmaceutical company to determine if I met their criteria for entry into the clinical trial. This included a biopsy of my cancer nodes, a bone marrow biopsy, a lumbar puncture, a heart and lung evaluation, and numerous blood tests to make sure I had no infections, viruses, or any inflammation. When all was said and done, I appeared to be an excellent candidate for this trial. I was reasonably healthy and the cancer was considered a low-burden disease that had not spread beyond my abdominal area.

What was it like to receive CAR T-cell treatment in the trial?

On December 5, 2016, my blood cells were taken from my body via apheresis and immediately shipped to the Kite pharmaceutical lab in California to be re-engineered. On December 27, 2016, after 3 days of pre-conditioning chemo done outpatient, I was admitted to the Cleveland Clinic and at noon my “re-engineered” blood cells were blessed by the hospital chaplain and were infused back into in my body. The process took less than 15 minutes. When it was over, I felt nothing. And I panicked a bit thinking those beefed-up blood cells should be wreaking havoc on my system. For 6 days, absolutely nothing happened. I was convinced it hadn’t worked. And then January 1, 2017, the cytokine storm or cytokine response syndrome kicked in! Happy New Year to me—Happy Hellish New Year to my husband.

For 36 hours I was comatose. My body and mind were in a catatonic state. I felt nothing and remember nothing about it. But my husband has never been so terrified and subsequently suggested to Cleveland Clinic personnel that maybe he could have been better prepared for what the results can be from the “storm.” Unfortunately, because this is a clinical trial, the results can be different for every patient. They try to tell you everything they’ve seen—which is why the consent form is 33 pages long and daunting. But until your loved one is actually going through the storm, you can’t really imagine the response.

Once I came out of the “storm,” my only real symptoms were extreme fatigue and weakness. And after less than two weeks in the hospital, I was able to go home to recover. All I wanted to do was sleep. I wasn’t even interested in eating. Thankfully, my husband was able to use his powers of persuasion to get me to go to physical therapy, and he also kept me well-stocked in bottles of Ensure.

January 23, 2017, we returned to the Cleveland Clinic for a PET scan to see how the T-cells had done. Our doctor walked in and immediately gave us the news: a complete response to the treatment—no sign of cancer. I even made him show me the PET scans side by side just to make sure nothing had been missed. The new PET scan had nothing on it. It was a true miracle that had my husband and I crying and then hugging the doctor and our clinical trial nurse. It was unbelievable! We feel so blessed. And prayers do work!

I will be going back to the Cleveland Clinic for frequent check-ups and blood work. And PET scans will be a part of my regular routine over the next several months/years. And I must admit, the PET scans and waiting for the results still leave me feeling anxious and nervous. This is part of my new normal now. In between, I would just like to get stronger and healthier and enjoy the retirement that started a year ago but got detoured.

What advice would you give to someone who is newly diagnosed?

My best advice: you must be your own health advocate. Ask lots of questions and don’t give up when you don’t get satisfactory answers. Whatever type of cancer you have, contact Cancer Commons and the national organization of your type of cancer, and ask about any clinical trials that might be suitable for you. At the very best, you could be put on a path to your own miracle. Secondly, you could be a pioneer that will help someone else find their own miracle.