In the summer of 2016, Sheena’s father called her from the emergency room. Her mother Shobha, a fitness trainer in the Bay Area, had experienced a seizure, and the doctors suspected a brain tumor. “I packed and moved back home from the east coast the next day,” Sheena says.

Shobha later had surgery to remove the tumor and received a diagnosis of glioblastoma (GBM). Her oncologist prescribed a standard GBM treatment of radiation and chemotherapy, but she had a bad reaction to the chemotherapy drug Temodar, and had to stop the medication.

“That threw us off completely because there are very few treatment options for GBM,” says Sheena, who has a master’s degree in public health and had previously worked in an oncology department. Shobha’s doctor advised that she wait and watch for tumor growth, but she and her family weren’t comfortable with inaction.

“I’ve had my own medical challenges and learned over the years how to advocate for myself,” Sheena says. “People assume that you should do whatever the doctor says, which is a good place to start, but I’ve found that you shouldn’t stop there.”

The family began looking into other treatment options for Shobha. “Every night, we researched clinical trials on ClinicalTrials.gov, and called the medical centers with trials in the morning,” Sheena says.

Meanwhile, they sought guidance from ASK Cancer Commons’ Emma Shtivelman and from previously featured Super Advocate Stephen Western. Emma and Stephen helped Shobha’s family sort through the many complex enrollment requirements for each trial, and narrow the options to trials with potentially more promising treatments.

“They were really our brainstorming partners through all of this because we didn’t know who else to talk to,” Sheena says. “It was a huge comfort to have them available as we navigated this new, scary territory.” 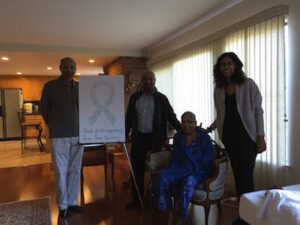 Shobha ended up receiving treatment with an immunotherapy drug and a device called Optune. She also tried a number of other therapies, and worked with oncology nutritionist Patrice Surley, to incorporate dietary changes and supplements. It wasn’t an easy transition, but improving the odds for her was the main focus.

Meanwhile, although she couldn’t do many of the exercises herself, she continued teaching fitness classes out of her home studio as she had for 15 years, while Sheena and her father worked from home.

“She would teach while sitting with her cane, and her clients said that her workouts got a lot more difficult now that she didn’t do the exercises with them,” Sheena says. “They love her. Working also focused her mind on something positive and off the difficult diagnosis and treatments.”

A year later, Shobha’s symptoms gradually returned, and her family pushed for an MRI, which revealed that the tumor had regrown. To their dismay, the size of the tumor disqualified her from participating in a particularly promising clinical trial that involved surgery plus injection of MDNA55, a toxin that targets glioblastoma cells.

“Dr. Kesari really, really fought for my mother,” Sheena says. After battling paperwork, back-and-forth calls, and a rollercoaster of promise and disappointment, Dr. Kesari, her neurosurgeon Dr. Achrol, and their team were able to arrange for Shobha to receive the MDNA55 treatment through the U.S. Food and Drug Administration (FDA)’s compassionate use program.

The treatment worked well for Shobha for a year, though she experienced some side effects. She is currently undergoing treatment in Los Angeles for a different trial.

Brain tumors are incredibly challenging on the patient and patient’s family due to any number of unexpected symptoms that can show up depending on the tumor location, and medication side effects, including physical limitations such as walking or using the bathroom to cognitive decline, memory and speech issues, vision issues, and extreme personality changes. For this reason, it is also one of the most financially difficult diseases on the patient and family. Professional caregivers can be hired but are usually not covered by insurance.

Through all of this, Sheena and her father have learned some key aspects of being caregivers. They recommend that families prepare for a lot of emotional ups and downs, which can come with any difficult diagnosis. Everyone deals with such news differently, so they urge families to try to be kind to one another as they adjust to the word “cancer.” Dr. Kesari leads a Q&A at a Brain Tumor Awareness Tea
organized by Sheena and her family

From a practical standpoint, after every scan, Sheena suggests getting multiple copies of the cd so that it’s ready to quickly mail out to brain tumor centers, if needed. It’s helpful to keep an updated Word/Excel file of all the latest results, labs, scans etc., so that precious time isn’t wasted collecting that data, in case it is needed for clinical trials and new physician appointments. She also says she wishes she had registered her mother as a patient in more hospitals when she was feeling well, so that they could easily get appointments and more opinions later on when they needed them urgently.

For seeking out information on treatment and other aspects of the glioblastoma experience, Sheena recommends online support groups (such as those found at Inspire and Facebook), as well as services like ASK Cancer Commons and people like Stephen and Greg.

She suggests connecting with the hospital social worker early to help pursue options, such as disability benefits, paid family leave, unemployment benefits, or other government programs, should they be needed. On the same note, it may be helpful to connect with close family, friends, a pastor or priest, and other key people who can help. “Many people are very willing to help, they often just don’t know how,” Sheena says. “So, it’s okay to ask for specific help.”

Crucially, she emphasizes the importance of finding doctors who are a good fit. “It really has to feel like they’re on your team and you can be very open with them.”

And lastly, Sheena advises always advocating for the best possible care. “So often, we put the responsibility on the doctor and just assume that’s the way it is. But it really is your own responsibility,” she says. “It’s an attitude shift. We have to be proactive in the process, and always remember that there is hope.”

Update:  We are deeply saddened to report that Shobha passed away on August 15, 2019. It is a privilege to continue to share her story and help keep her memory alive. Click here to visit Shobha’s memorial website.