On the day after Christmas of 2014, Adam Hayden experienced his first strange “episode.”

“We had just carried all the presents upstairs, and as I was walking towards our bedroom I was struck by this strange lightheadedness that I hadn’t experienced before,” he says. “I didn’t collapse, I didn’t pass out, I just kind of folded down to the ground.”

Adam and his wife Whitney, parents of three young children, chalked up the incident to holiday stress. But over the next year and a half, he kept having similar inexplicable episodes. Finally, in May of 2016, an MRI scan revealed a 71-milimeter tumor in the parietal lobe of Adam’s brain. The episodes had been seizures—symptoms of the tumor.

“When you have an MRI scan like that, things start to move really quickly,” Adam says. A few days after the scan, he was in the operating room to remove the tumor. The impact of the surgery on his brain left him in a wheelchair, and he needed intensive physical therapy to restore his ability to walk.

Meanwhile, Adam’s tumor tissue was analyzed, and on June 10, 2016, he received a diagnosis of glioblastoma. He began a standard treatment protocol of initial chemotherapy and radiotherapy followed by a long-term, 11-cycle chemotherapy regimen to keep the tumor from growing back.

“My oncologist said we could go to 12 cycles of maintenance chemo, but there has not been a randomized controlled trial validating that more is better, so taking the side effects into account, my wife and I decided to stop at 11 cycles,” Adam says. “That was in July, and I have not been on any active treatment since then.”

In late 2016, Adam’s oncologist suggested that he supplement his standard treatment with Optune, a device that had recently been approved by the U.S. Food and Drug Administration. Optune is a portable device worn on the head that produces an electrical field intended to disrupt cell division, thereby preventing tumor growth.

Adam says that his experience with Optune’s manufacturers was “terrific,” and he used the device for over two months. Ultimately, however, he and his wife decided it wasn’t for them.

“What the clinical trials show is that Optune provides a median of five months’ extra survival, sometimes much more and sometimes less, depending on the patient,” Adam says. “But the kids were afraid of how it looked, it was cumbersome to handle, and it was just an obstacle to daily living, so after hours and hours of talking about it, we made the decision to discontinue.”

As a graduate-trained philosopher with a penchant for writing, Adam was compelled to document his glioblastoma experience on a blog he named Glioblastology. He credits his father and grandfather, both pastors, with instilling him with a knack for storytelling.

“My grandfather was a loud, larger-than-life figure with a belly laugh, and storytelling was commonplace around the dinner table any time we visited,” Adam says. So when Adam received his glioblastoma diagnosis, he says, it felt natural to share his story online. 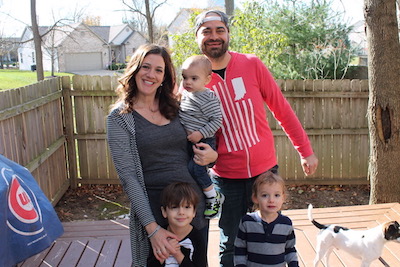 “People say, ‘it’s really courageous of you to live your journey publicly,’ but I was already living on social media, and it would have been stranger if I dropped off the map.”

Adam started writing immediately. “The day after my surgery, as soon as I could lift my head off the pillow, I asked my wife, ‘where’s my journal?’ ” he says. “It was therapeutic for me to write and tell my story.”

But Adam worried that he’d lose his readers’ interest if he just told his story over and over again. So he began to use his blog to put his story into a different context. “I began to write with the goal of teaching clinicians, patients, and others how to find value in their experiences.”

After publishing many posts, Adam was thrilled to discover that what he was doing on his blog—and what so many other cancer patients do—had a name: narrative medicine. In this approach, narrative structure is applied to patients’ experiences with illness and treatment in an effort to enhance the healing process.

Adam became especially interested in the works of narrative medicine practitioner Rita Charon, MD, at Columbia University. After studying Charon’s work, Adam was honored to present at a medical ethics conference, with Charon in the audience. An example of Adam’s take on narrative medicine is featured in his guest post at the science communication blog, PLOS SciComm.

Adam is actively involved in brain tumor and narrative medicine communities, including the National Brain Tumor Society, and he has shared his perspective in many presentations and publications. Recently, he wrote an open letter to Senator John McCain after news broke of McCain’s own glioblastoma diagnosis.

Over the course of his treatment, Adam has also found valuable support in the #BTSM (Brain Tumor Social Media) community on Twitter, which was co-created by fellow brain tumor patients Liz Salmi and Charlie Blotner. Community members interact with each other regularly by tagging their tweets with “#BTSM” and by participating in live monthly tweet chats, which Adam now co-moderates.

“If there’s something that you’re wondering about or that you think others in the brain tumor space could learn from, you can tweet it and tag it with #BTSM, and you’ll get thoughts and support from the community,” Adam says.

Thinking and talking about brain cancer

Adam says that his background in philosophy has helped shape his approach to glioblastoma treatment. As a graduate student studying the philosophy of science, he developed an acute sense of the limits of human knowledge and understanding.

“I was equipped with this humble way of viewing scientific theories that taught me to ask questions and never be too confident in the answers, knowing that throughout history, our theories have been evolving,” Adam says.

“So when I received my diagnosis, I was able to push past the doom of wondering what would happen to me. I realized that I didn’t have to be defined by whatever I was reading about the latest glioblastoma research since it is always transforming, and I could focus on how I would approach it.”

Adam has also taken a thoughtful approach to discussing brain cancer with his kids. He has found ways to frame his disease using words and ideas his kids can understand, instead of avoiding the topic altogether. 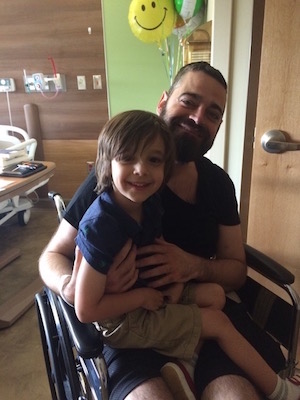 For instance, when Adam was recovering from his surgery, his five-year-old son expressed his concern about his dad’s wellbeing. Off the top of his head, Adam came up with the idea to compare his surgical incision and staples to a knee-scrape—a concept familiar to most kids.

“We talked about what happens when you fall and skin your knee; you put a Band-Aid on it and it scabs, and after a while the scab falls off,” Adam says. “So I told him, ‘that’s going to happen with daddy’s head.’ ”

Adam says he would advise other parents with cancer to be honest and frame things in terms of their kids’ level of understanding.

The “invisibility” of brain cancer

Despite his advanced diagnosis, Adam has not experienced many of the symptoms commonly associated with glioblastoma.

“So many people in the brain tumor community have suffered language processing issues, cognitive impairment, and more as a result of either the tumor or the treatment,” he says. “Fortunately I have tolerated treatment well, and while I do have some motor and sensory symptoms, I’m just about as sharp as I’ve always been.” Adam and his wife have connected with a palliative care doctor to proactively prepare themselves for cognitive decline, a near universal symptom of disease progression for people living with a malignant brain tumor.

The seizures that portended his diagnosis still play a big role in his life. Specifically, Adam regularly experiences focal seizures, in which he gets lightheaded and dizzy with tingling, numbness, and weakness on the left side of his body. The seizures are more likely to occur if he has been working hard, such as by writing.

“I can feel the onset of a seizure pretty well,” Adam says. “I know what my triggers are, and I remind myself to schedule my days around that.” Medication is also helpful in preventing seizures, but Adam notes that many fellow brain tumor patients find these treatments prohibitively expensive.

With his symptoms well-controlled, Adam is often reminded that people tend to assume that everyone they meet is healthy and able-bodied, unless they see an obvious sign otherwise.

“Most people’s picture of a cancer patient is someone who is sickly, thin, and nauseated,” Adam says. “What I try to highlight often in my presentations is that with brain cancer, we may look pretty good on the surface, even though we’re sick. We need to be cognizant of people’s visible disabilities, but also invisible disabilities that don’t always present themselves as obviously.”

Read Adam’s writings and learn more about his activities at his blog, Glioblastology. You can also follow him on Twitter and follow his wife’s writings on her blog, Faith, Hope, and Wine.